by Ryan Hubbard in Kraków

Andriy Shevchenko picked up his first victory in charge of the Ukrainian national team on Sunday night, with a hard-fought 3-0 victory over Kosovo in Kraków.

A first-half strike from Granada striker Artem Kravets settled early nerves, however the home side – playing away from home – were forced to sweat until the last ten minutes, when a well-worked Andriy Yarmalenko strike and a Ruslan Rotan stunner put the game to bed.

The game took place in unusual circumstances – in Poland’s second city, some 250 kilometres from the Ukrainian border – due to political wranglings between the two nations.

Not only searching for their place in world football, but also world politics, the fledgling team were denied entry to Ukraine as they do not recognise Kosovo as a nation, and therefore were unable to accept the passports of both players and officials.

As a result Ukraine’s neighbours, who do recognise the Kosovans, were sought to host only the former Serbian state’s third-ever qualifying game, following on from their 1-1 draw in Finland and their 6-goal hammering by Croatia on Thursday.

To add further narrative, due to the hastily-arranged nature of the game, the Ukrainian football association missed deadlines imposed by Polish laws which govern mass events; meaning that security could not be arranged, and the attendance was limited to just 999 spectators, despite many more descending on the city. 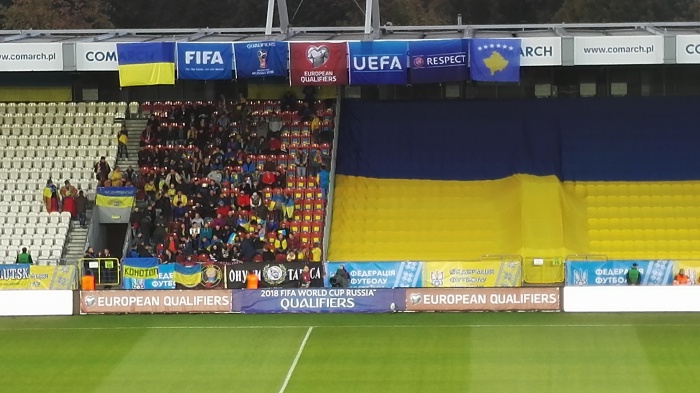 Kosovo were quicker out of the blocks with their bright spark, Vitesse midfielder Milot Rashica, causing all sorts of problems for the Ukrainian back line, but lacking in finished product.

Soon, the expected barrage of Ukrainian attacks began, with Konoplyanka spurning a couple of chances, and Kravets’ outstretched leg failed to turn the ball goalwards. Eventually, Ukrainian persistence was rewarded as Kravets netted his second of the campaign, with a powerful shot which deflected over the Kosovan keeper.

Although the visitors responded in the second half with several decent chances, they rarely threatened Andriy Pyatov in the Ukrainian goal.

At the other end, three debatable penalty shouts were denied by the Dutch referee, while a 25-yard screamer from substitute Rotan was disallowed as several players had strayed into an offside position.

A handful of Kosovo fans made the trip to Poland.

It eventually took until the final ten minutes for Ukraine to put the game to bed, with another substitute, Olexandr Karavaev, providing a tantalising cross from the left, with Yarmalenko’s first touch creating space before slotting coolly past keeper Samir Ujkani.

And with the clock ticking down, Dnipro Dnipropetrovsk midfielder Rotan created a carbon-copy of his earlier disallowed strike to ensure the Yellow-and-Blues returned to Kiev with all three points.